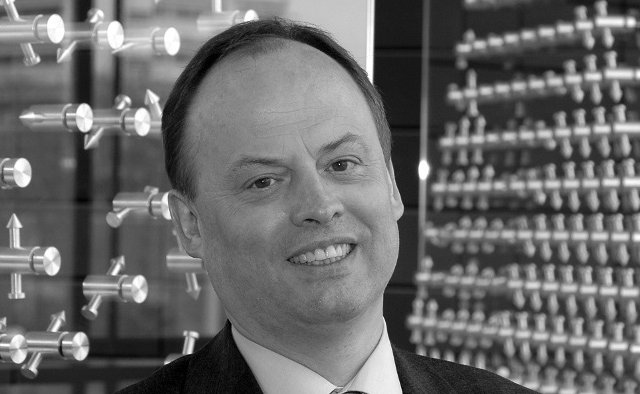 Karlheinz Meier was one of those extraordinary people who bring ideas into the world that last far beyond their lifetime. He was always curious, always asking questions, and he dedicated his life to the two most fascinating complex systems known to man: the universe and the brain. After spending his early scientific career helping to understand the first, where most notably he contributed to the discovery of the Higgs Boson in 2012 at CERN, he decided, in 1996, that it was time to move on to the second. His neuromorphic career started with the investigation of image sensors after the famous turtle retina example from Tobi Delbrück. The microelectronic research capabilities came from the Heidelberg ASIC laboratory, which Karlheinz founded in 1994 to support high-energy physics.

When it was proposed to him, in 1999, that new analog circuit technologies developed in Heidelberg could be used for a novel class of accelerated analog neuromorphic circuits, it really took no effort to persuade him that investigating this line of neuromorphic research was worthwhile. Having models of neuronal systems orders of magnitude faster than the biological example facilitates the research of long-term processes like learning and development. Considering the fact that the brain grows from a single cell, there will be the necessity to emulate these long-term processes in future neuromorphic systems.

In the subsequent years he dedicated most of his energy to support his research team to overcome all obstacles – a decade-long effort which culminated in the BrainScaleS systems. The international recognition of his work in Neuromorphic Computing started with the SenseMaker project in 2002, where for the first time calibratable analog neurons with spike-time dependent plasticity were demonstrated. SenseMaker was followed by the FACETS and BrainScaleS projects, research projects initiated and headed by Karlheinz and well known to the neuromorphic community. He saw the importance of scaling to achieve brain-like computing capabilities. The wafer-scale integration of the first generation BrainScaleS systems demonstrates the feasibility of scaling continuous-time neuromorphic computing to full silicon wafers and beyond.

He was instrumental in founding the Human Brain Project together with Henry Markram and Richard Frackowiak in 2009, a ten-year endeavor that is now in the last third of its term. He invested far more than the usual amount of time to keep this project alive and running during all the difficult times and conflicts it had to endure. It has been his credit that Neuromorphic Engineering based on accelerated analog neuromorphic computing became an important part of the Human Brain Project and its EBRAINS neuroscientific research infrastructure currently under development.

Since 2014 he was part of the advisory committee and in 2016 he became one of the coordinators of the workshop series on Neuro-Inspired Computing Elements (NICE), one of the important international meetings where the neuromorphic community meets and exchanges its most recent ideas and successes.

Karlheinz Meier passed away on the 24th of October 2018 after fighting a grave illness bravely for more than two years. Let this Special Award be a token of our ever-persistent appreciation of Karlheinz Meier and his invaluable contributions to the field of Neuromorphic Engineering.

Winner of the 2019 Misha Mahowald Prize for Neuromorphic Engineering

The pioneering space imaging project Astrosite™ of The Western Sydney University research team is the 2019 winner of the prestigious Misha Mahowald Prize for Neuromorphic Engineering.

Misha Mahowald and her Prize for Neuromophic Engineering

During the eighties, the doyen of very large scale integration of digital electronic circuits, Carver Mead, began to promote the notion that the physics of transistors in their sub-threshold, analog, domain resembled the physical relationships observed also across neuronal membranes. His vision was that it would be possible to build analog circuits with similar computational properties to biological neurons and sensors. Because these circuits would operate largely in the sub-threshold, their power consumption would be very small; and because they were built in CMOS VLSI very large systems could be built by leveraging the manufacturing systems employed industrially for producing digital VLSI. This concept, that one might harness analog CMOS VLSI for the design and construction of brain-like neural networks operating in real-time, was explained in his seminal book Analog VLSI and Neural Systems.

The award is considered annually.

The competition is open to any individual or research group worldwide.

Do you want to register to our mailing list to receive news on neuromorphic technology, events and conferences?